After much reading, and knowing we didn’t want to get up at 3 am and drive for 3 hours, we decided to take a drive up to the summit of Haleakala for sunset. However, traffic had something else in mind. Since we were staying in Lahaina, there is basically one way in and one way out. And when we were leaving, there was an accident that completely shut down the only way out. So we turned around and went home.

But as luck would have it, the next evening that we had open to drive up there was going to be a full moon! I must say it was spectacular. Soon after the sunset behind the clouds, the full moon rose right behind us. The pictures don’t do it justice as we travel light and shoot with our phones, but it was amazing. When you get here, you will have to pay an entry fee, so if you plan on hitting several spots, it may be worth the annual pass. 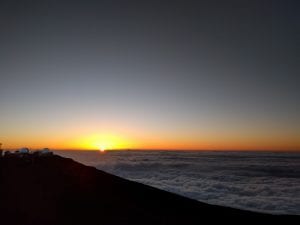 If you go, keep in mind IT WILL BE COLD AND WINDY! I know it’s Hawaii, but you’re 10,023 feet up in the air here. Plan accordingly. While driving up you’re going to pass through nearly every sort of climate zone that exists. And it’s likely going to be foggy for stretches so be careful and drive slowly. Along the way there are several local residents who sell their ample fruits and flowers on the roadside, usually “Honor Stands”. If you think you might want something, bring small bills and get it now. It’ll be dark when you come back.

Full moon rising behind us at Haleakala

Speaking of Long Drives – A few days later we decided to make the trek out to Hana.

The Road to Hana is one of the most beautiful, scenic drives in the world, not just in Maui. The distance is not too

The stop light on Hana Hwy

great, but the drive is long, winding, and very slow. Flying Dad, having driven through something similar when we went to Costa Rica decided that if we were going to make the 2.5 hour or so drive up there, we were NOT going to turn around and come right back. We’re going to stay a night. The road itself is quite scenic and definitely a safer version than what we had driven in Costa Rica, which had no guard rails, washed out roads, and every 15 minutes a dog darting out into the road. However, you still have to go very slowly because there are a number of blind turns, one lane bridges, and tourists getting out of their cars to look at things (not recommended). Once you get to Hana you’re going to be exhausted. We had booked a room at the Hana Kai, as there are only a handful of options. However, after booking through Expedia, we later received a phone call that Hana Kai was booked. Well, since there was only one other option, Expedia was nice enough to book us a room at the Travaasa and pay the difference. HUGE upgrade there, thanks!

Upon arriving at Travaasa they had fresh cut banana stalks hanging which you could just grab a fresh banana from and chow down. When you check in they provide everyone in the party with a refreshment (I believe it was POG) and a very nice kukui nut necklace. When you’re ready to go to your room, or anywhere else, they have golf carts to drive you around the property. We were informed at check-in that they are a tip-free property, so do with that information what you will. We ended up with a waterfront room where you could sit and listen to the waves crashing, and you could look out and see huge expanses of sea, and to the right horses grazing in the field. The property itself has TONS of free activities if you’re there long enough. Fishing, Yoga, Horseback Riding, etc. They even had a Manager’s Reception while we were there with free drinks and chips n guacamole!

The view from our room at Travaasa 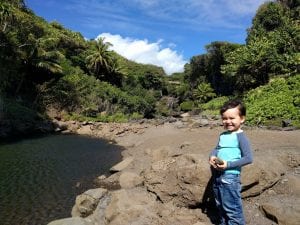 We got up early the next morning and decided to take a drive to see the Seven Sacred Pools of Oheo. This was again another arduous drive, albeit much shorter than the one up to Hana, but keep it in mind if you’re trying to do everything in one day. We strongly advise against it . The pools and waterfalls are beautiful indeed. However, depending on what weather conditions have been, there could be a trickle of water, or a deadly torrent. Before entering the park you’ll find posted stories about sudden torrents of water sweeping people away to their deaths. Quite tragic and not worth the risk for me. We made our way around the trail to where the bottom pools are, and while the trail is fine for a young one, traversing the rocks and water to get down to where the pools are is tough, and maybe not worth the risk. After leaving the pools, we opted to go back the way we came since the rest of the trail is steep and windy. Not a great combination for someone who is 30 lbs – we didn’t want a literal Flying Lad.

Finally, after getting back to the hotel we decided to spend a little time playing in the pool before taking the long, arduous drive back home. And Flying Dad treated himself to his only sunburn of the trip. Great job, dad. 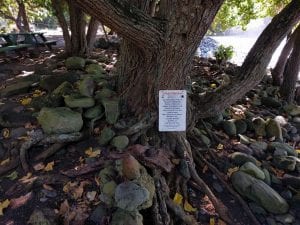 On our final days on the great island of Maui, we decided to stick closer to Lahaina. We tried to find the perfect snorkeling spot that wouldn’t be too rough, crowded, or rocky and would give Flying Dad a chance to swim with some turtles. We had read that Honolua Bay would be a good place to check out. It’s a little bit off the beaten path and takes a walk to get there. However, when you do get there, there’s no beach and it is very rocky. There’s a very nice sign near the walk to the water that tells you about someone who died there. No thanks, I think we’ll pass. It is beautiful, there are turtles, and you’ll have a cool view of the surfers in the distance who seem to climb down a cliff face in order to get to the waves. Oh, and there are chickens. So many chickens running around Maui. Eggs should be free here!

I see a turtle head pokin’ out…

On the way back to Lahaina, we decided to stop and let Flying Lad try his first Hawaiian Shave Ice! We stopped in at Ululani’s and one of the workers took the time to step out and give Flying Lad a fresh snowball! The ice is really cool, it’s very soft, and not crumbly at all. The number of flavors they have here is mind boggling! We recommend sticking with their “favorite combinations” to make it easier. We got a combo with Mango, Tamarind, and Passion Fruit. NOM! Very Maui flavors.  However, Flying Lad had this to say: 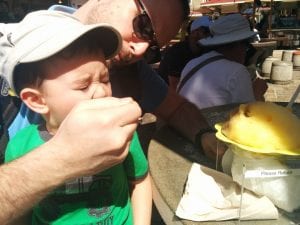 Ok, so we’re not sure if it was the flavors, or the cold. But he sure made a face. 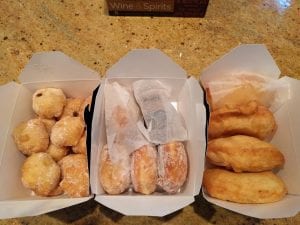 The next morning before departing our paradise family vacation, Flying Dad drove over to Aloha Malasadas by Tanya.

They only set up their tent twice a week (Tues and Sun) from 7 am – 1030 am. But they make delicious, hot, fresh malasadas that I would not pass up as they are some of the best in Maui. They even offer a gargantuan breakfast malasada stuffed with eggs, cheese, and meat! 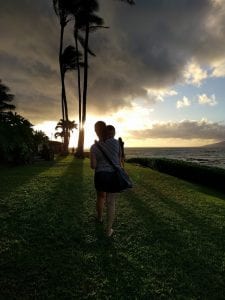 off into the sunset

So much to do with a toddler in Maui!  We had a great time!  Can’t wait to go back!  Until then, Aloha!

What to Expect When Taking Asiana Flights with Kids

A Short Trip to San Diego with a Toddler

Flying Lad Goes Around the World